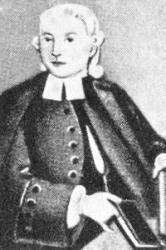 Hiller, Philipp Friedrich, son of Johann Jakob Hiller, pastor at Mühlhausen on the the Enz, Württemberg, was born at Mühlhausen, Jan. 6, 1699. He was educated at the clergy training schools at Denkendorf (under J. A. Bengel) and Maulbronn, and the University of Tübingen (M.A. 1720). His first clerical appointment was as assistant at Brettach, near Neckarsulm, 1724-27. He afterwards held similar posts at Hessigheim and elsewhere, and was also, from 1729-31, a private tutor at Nürnberg. He was then, on St. Bartholomew's Day, 1732, instituted as pastor of Neckargröningen, on the Neckar, near Marbach. In 1736 he became pastor of his native place, and in 1748 pastor at Steinheim, near Heidenheim. In his third year of residence at Steinheim he lost his voice, and had to employ an assistant to preach. He died at Steinheim, April 24, 1769. (Koch, v. 107-126; Allgemeine Deutsche Biographie, xii. 425-426, &c.) Of Hiller’s hymns the best appeared in:—

(1) Arndt's Paradiss-Gartlein…..in teutsche Lieder, Nürnberg, N.D. [the copy in Berlin has a frontispiece dated 1730]. This was written during the time he was tutor at Nürnberg. P. Gerhardt had founded the fine hymn "O Jesu Christ, mein schönstes Licht,"
(q.v.) on one of the prayers in the volume of devotions which Johann Arndt had published, 1612, under the title of Paradies-Gärtlein; and Gerhardt's example led Hiller to think of turning the whole of these prayers into hymns. The book is in four parts, and contains 301 hymns, 297 being founded on Arndt and four original. (2) Geistliches Liederkästlein, Stuttgart, 1762, and a second series, Stuttgart, 1767. Each series contains 366 short hymns, one for each day of the year. A complete reprint of these and the other hymns of Hiller (1075 in all) wased. by C. C. E. Ehmann in 1844 (2nd ed. 1858).
Hiller is the most productive and most important of the earlier hymnwriters of Württemberg; and is the poetical exponent of the practical theology of his friend J. A. Bengel. The hymns of his Paradiss-Gärtlein, while clear and Scriptural, are decidedly spun out (see No. xii. below). His Liederkästlein, contains the hymns of his riper years, and reveals a depth of spiritual wisdom, an almost proverbial conciseness, an adaptation to console and direct in the most diverse events of life, and the most varied experiences of the soul, a suitability as a manual for daily devotion, and a simple popularity of style that speedily endeared it to the pious in Southern Germany. It has passed through many editions in Germany, while colonists (especially from Württemberg) have carried it from thence wherever they went. It is said, e.g., that when a German colony in the Caucasus was attacked by a hostile Circassian tribe some fifty years ago the parents cut up their copies of the Liederkästlein and divided the leaves among their children as they were being torn from them into slavery.

The use of Hiller's hymns in Germany has principally been in the hymnbooks of Württemberg, and, through J. J. Bambach's Haus Gesang-Buch, 1735, in Hannover.